According to data published by the General Inspectorate of Police, during 2020, due to the flare up in episodes of domestic violence, men and women committed an approximately equal number of murders. According to the same source, before the health crisis caused by the COVID-19 virus, most such crimes were usually committed by men.

According to Daniela MISAIL-NICHITIN, Executive Director of IC La Strada, this is a direct consequence of the fact that, in times of crisis, the problem of domestic violence tends to be minimized. Out of fear, out of distrust, often financially dependent on aggressors, women postpone when they decide to seek help from law enforcement. They end up killing their aggressor partners as a defensive reaction, a desperate gesture that illustrates the seriousness of the forms of violence established in some families in crises.

The analysis of the pandemic's impact on the phenomenon of domestic violence was the main topic of a dialogue between law enforcement representatives, which took place in the last couple of days in the context of a collaboration between IC La Strada, the General Inspectorate of Police, and the Soros Moldova Foundation.

In other news, the police discussed the situations when, on the spot, while on calls related to cases of domestic violence, the victims refused to testify or asked not to actually punish the aggressor: "talk to him, scare him a little, but don't put him in jail.". In such moments, says Daniela Misail-Nichitin, we need to consider the multitude of psychological, social, and economic factors that determine this woman's behavior. At the same time, the hesitation of the victims is a signal that we must return with risk assessment measures in families where, at the first intervention of the officer, the case of violence was not confirmed. This logic also explains the paradox of official PGI statistics for 2020. According to national data, the police registered 12,970 reports regarding conflicts in family relationships and only 19% of these were confirmed as cases of domestic violence.

Aliona DRAGOMIREȚCAIA, Chief of the Child Safety Department of the Public Order Directorate of the NIPH, GPI:

It was difficult to identify domestic violence during this period until the victim notified us. In addition, due to the limited travel, it became pretty difficult to perform forensic examinations. Some of the officers went with the victims to the medical centers, but such cases were few.

The workshop participants talked about situations in which they managed to identify solutions, regardless of the impediments caused by the health situation. Marin URSU, senior sector officer, Criuleni Police Inspectorate, mentioned the importance of collaboration between law enforcement and community members: I had a case when the aggressor's relatives identified a temporary home for him period when he had to comply with the restraining order which was issued. This way we were able to leave the victim at home with the child.

Marin MAXIAN, Deputy Chief of the General Inspectorate of Police: I am glad that we now have the opportunity to discuss openly and see together how we can address domestic violence in a complex way, what mechanisms to apply, if we need to review internal protocols or, perhaps, if we need to try to act at the legislative level, through aspects regarding the executive code. For the leaders of the territorial units - I would like you, as managers and leaders, to get acquainted with the problems of this spectrum of crimes, to come up with proposals to the decision-makers, to impose yourself, if necessary, but also to be good leaders and motivation for your subordinates.

From the lessons learned during the pandemic, police officers mentioned empathy and readiness to adapt to the new conditions as essential qualities in working with people in need of help: "In some cases, we work very late hours, around midnight, when the victims could speak, an essential aspect for the correct elaboration of the documents." At the same time, to improve the quality of law enforcement intervention, the officers came up with some recommendations. The police stressed the need to work with multidisciplinary teams in the territory. The representatives of the law enforcement bodies also insisted on the importance of rigorous documentation of domestic violence cases so that the aggressor can be held accountable according to the gravity of the crime committed. I do not see the efficiency of unpaid working hours for the benefit of the community as a punishment measure for aggressors, says Artur DILION, chief officer of the Community Interaction Section of the Public Order Directorate of the NIPH, GPI.

Over 100 police officers participated in the workshops for exchanging good practices between March 31 and April 6. The events took place in the context of the partnership between IC La Strada, the General Inspectorate of Police, the Ministry of Internal Affairs of the Republic of Moldova, with the support of the Soros Moldova Foundation, within the project “Consolidating the effective response of law enforcement to domestic violence in the context of public health emergencies." 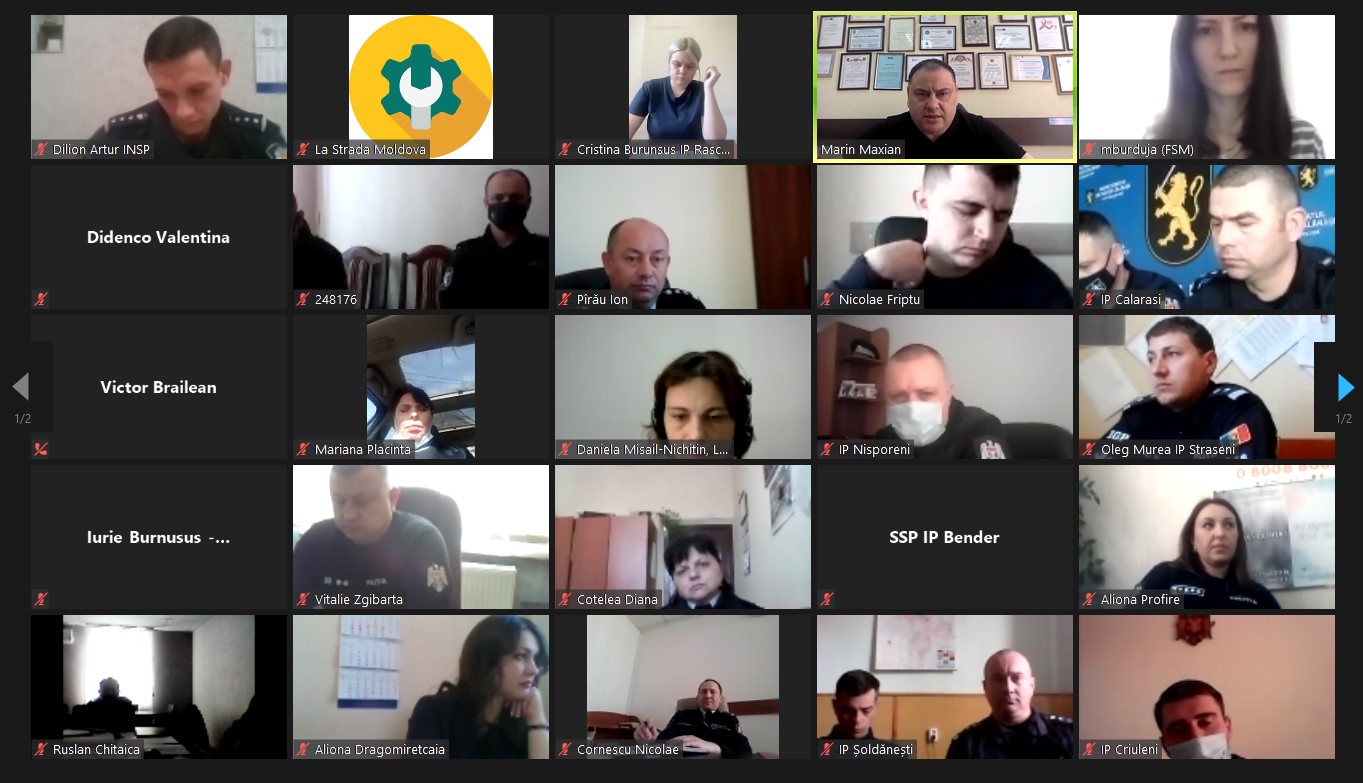 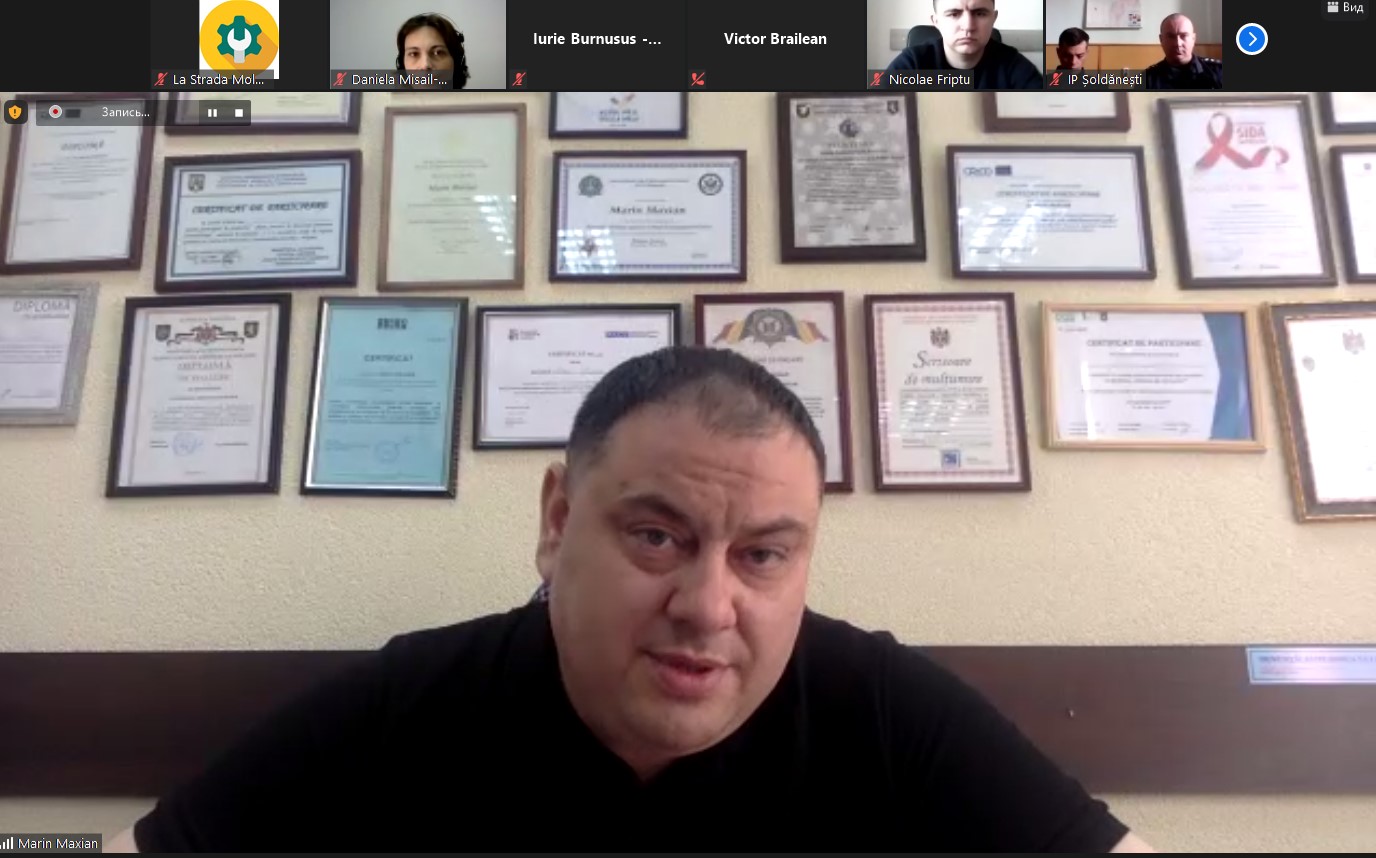