Today, November 19th, IC La Strada Moldova and the General Police Inspectorate signed a long-term collaboration agreement, the purpose of which is to coordinate and support the joined efforts in preventing several crime categories, including online sexual abuse of children.

"We live in a society with a low level of empathy and awareness of the dangers that a child may face online. We are a society that criticizes and blames the child for being harassed or assaulted on the Internet, a society that cannot accept that it failed to prevent these risks through education. However, children have no way of knowing these dangers without us, adults, talking to them about them in clear terms and without understanding the difficulty of identifying the risks of sexual exploitation of children online ". – this is the statement made by Elena BOTEZATU, the director of the Issues Affecting Children program of IC “La Strada Moldova” during the press conference held after the signing of the collaboration agreement.

Today's children and teenagers increasingly explore and express their sexuality through information and communication technologies, especially on social networks and messaging platforms. Out of curiosity, lack of knowledge, and natural physiological development, the child generates and shares images and videos of explicit sexual character. The phenomenon is known in the field as "self-generation" or "self-generated materials." Abusers exploit the child's vulnerability for personal gain.

Such cases are a real challenge for law enforcement agencies, especially when everything is based on the child's statements and no other evidence is found that would confirm the abuse. In the practice of La Strada Moldova specialists, there have been many cases where the law enforcement agencies have failed to identify all children who have suffered because of a single abuser.

In this context, during the last years, the collaboration between La Strada Moldova and GPI has focused especially on continuous support and training for consolidating the skills of the professionals working with victims of crimes. For the first time, however, the parties will not only be collaborating in combating human trafficking, domestic violence, and sexual violence, but the list of areas of interest will also include child safety in the online environment, namely counteracting child sexual abuse and exploitation online.

Ana REVENCO, Executive Director of La Strada Moldova, mentioned: "The commitments we make today involve a close, multidimensional cooperation between our institutions, from preventing of a wide range of crimes, support in annual information campaigns, to training specialists, elaborating and applying working tools and of course identifying and offering specialized assistance to victim-witnesses. We intend to continue to bring innovative knowledge, tools, and approaches to enable the police to bring more security to women and children in the face of the danger of sexual abuse and domestic violence. We will come up with bolder practices and ways of cooperation, unique in Moldova, but which have proven their effectiveness in other European countries and beyond". 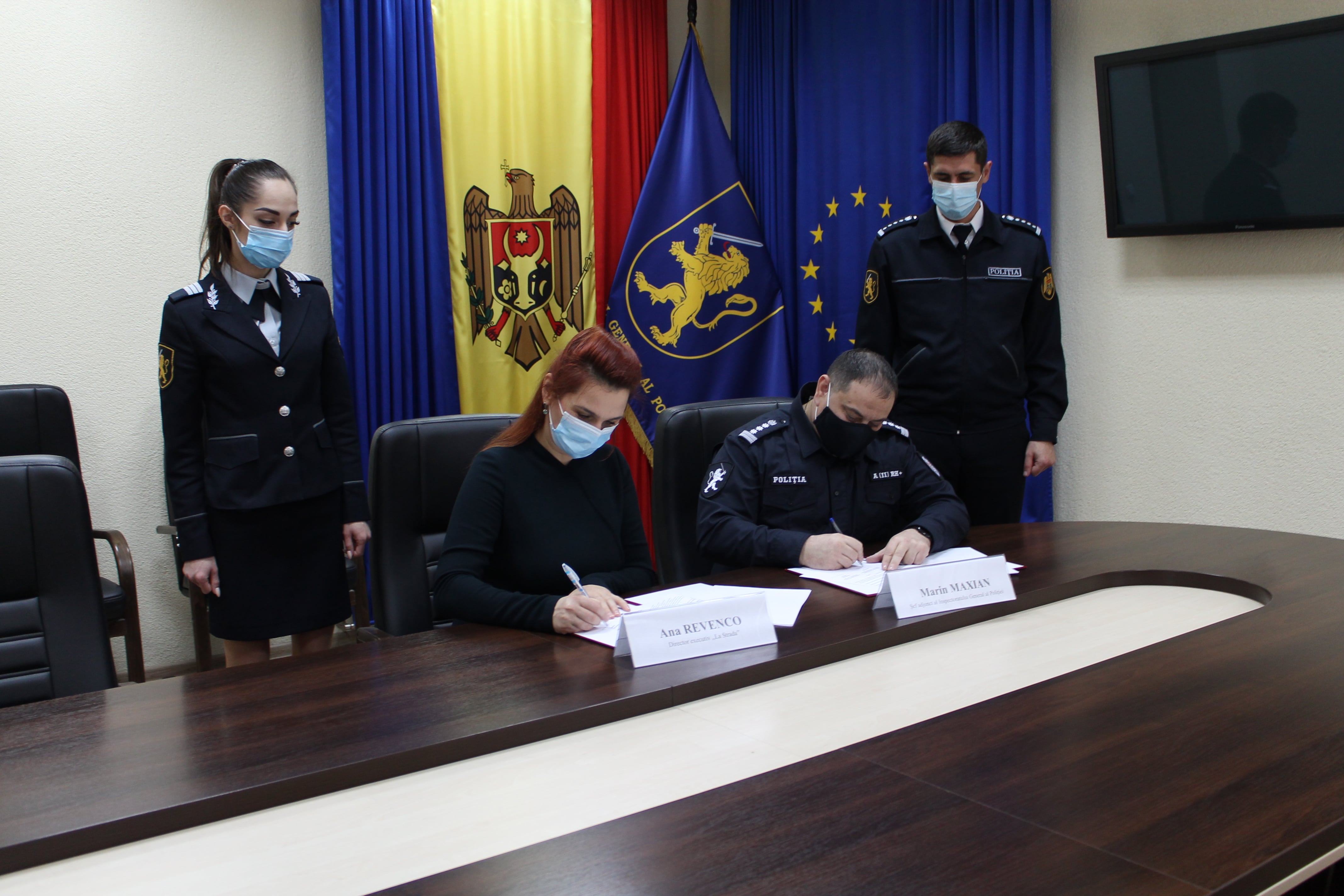 "The strengthening of this partnership is due to the great collaboration we had with La Strada Moldova in the past and the good relationship created between our institutions. An important factor remains the General Police Inspectorate's responsibility for preventing human trafficking, domestic violence and abuse, and sexual exploitation of children through online resources. It also motivated us to approach social issues through the prism of the community police model, where any community problem points to the imperative of participation and civil society in solving problems of common interest". 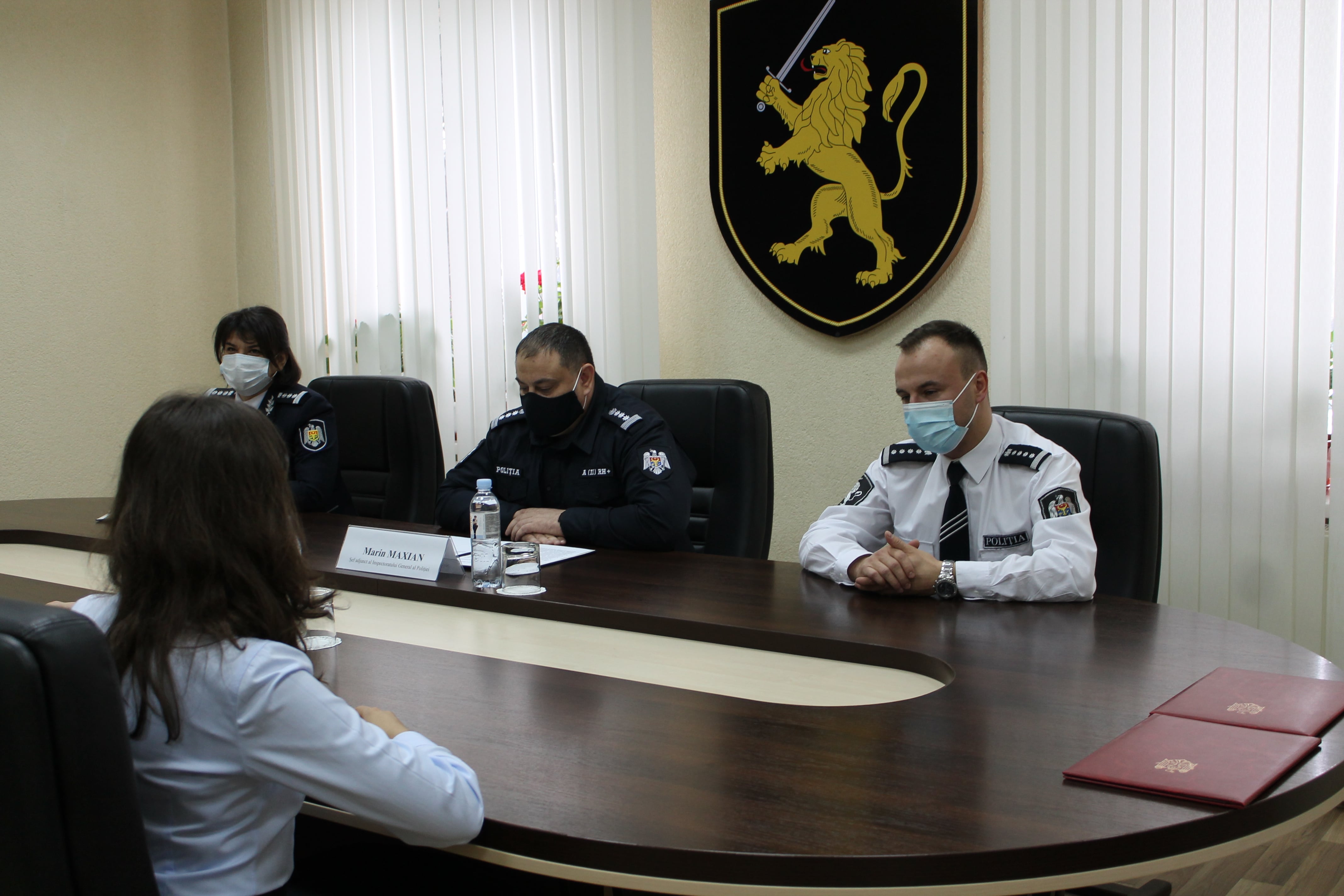 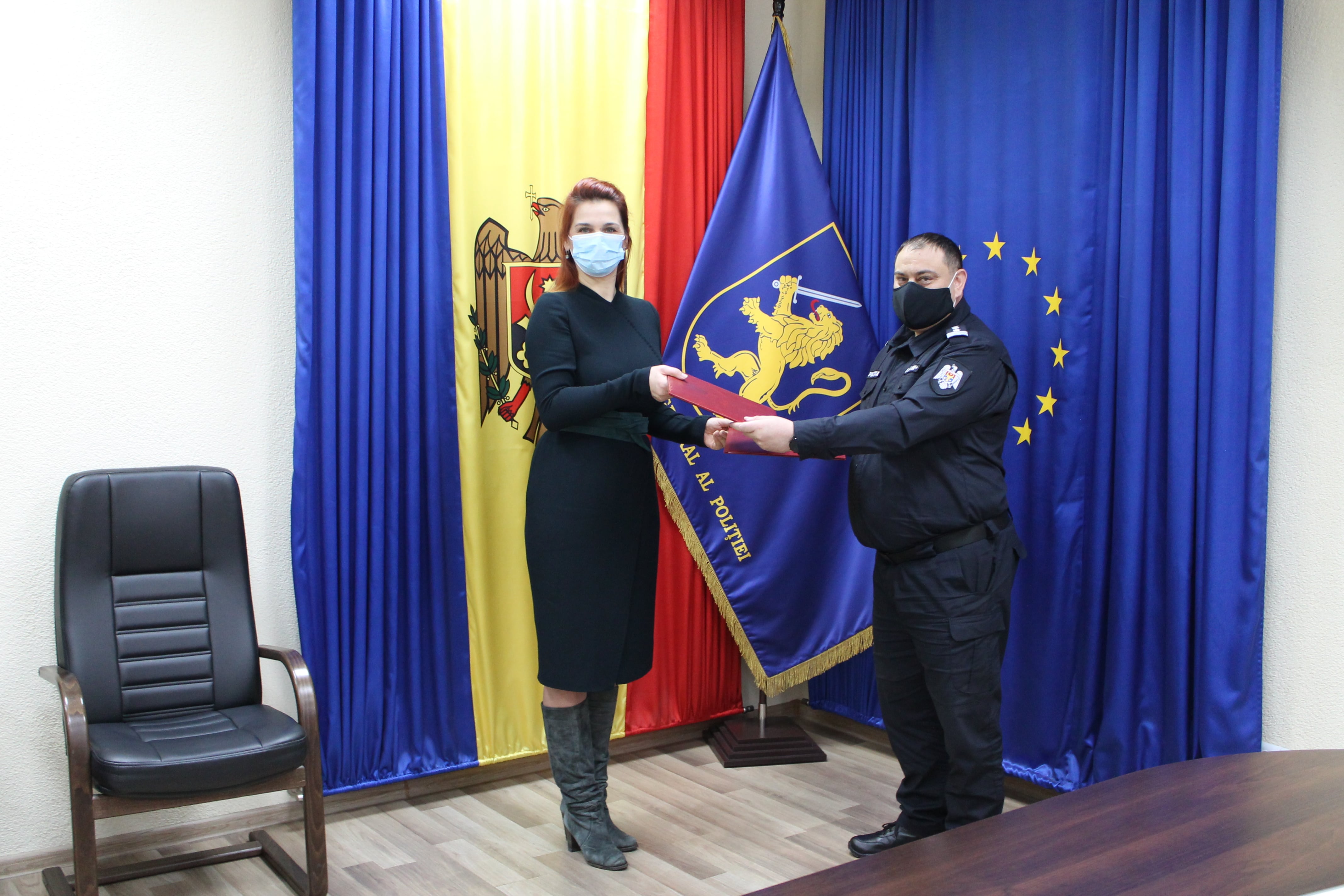 The exact objectives of the agreement signed today are the coordinated actions between GPI and La Strada Moldova in order to implement state policies in the field of counteracting the above-mentioned phenomena and promoting the safety of children online, as follows:

2) ensuring the access of beneficiaries to restorative justice by accessing quality services and preventing secondary victimization;

3) elaboration of tools and procedures for the identification, referral, assistance and protection of beneficiaries;

5) raising public awareness on the prevention and combating of the crimes mentioned in this Agreement and promoting the safety of children on the Internet;

6) studying the mentioned phenomena, collecting the necessary data and elaborating recommendations for improving the state policies in the relevant fields and other specific objectives.

Today's conference was held in the context of two significant events - the European Day on the Protection of Children against Sexual Exploitation and Sexual Abuse, marked annually on November 18th, and the UN Campaign "16 Days of Activism Against Gender-Based Violence", between November 25th and December 10th.

Informative note: Due to superficial procedural actions, about 8 out of 10 cases of online sexual abuse do not reach the stage of criminal prosecution. For example, in the first ten months of this year, on the siguronline.md platform, 49 cases of alleged online sexual abuse against children were reported (172% more compared to the data recorded in 2019).

In the first ten months of this year alone, La Strada specialists provided legal and psychological assistance to 94 children - victims of various forms of sexual abuse and sexual exploitation (45 cases were registered this year). Of these, 25 are victims of online sexual abuse. The youngest victim is only six years old. 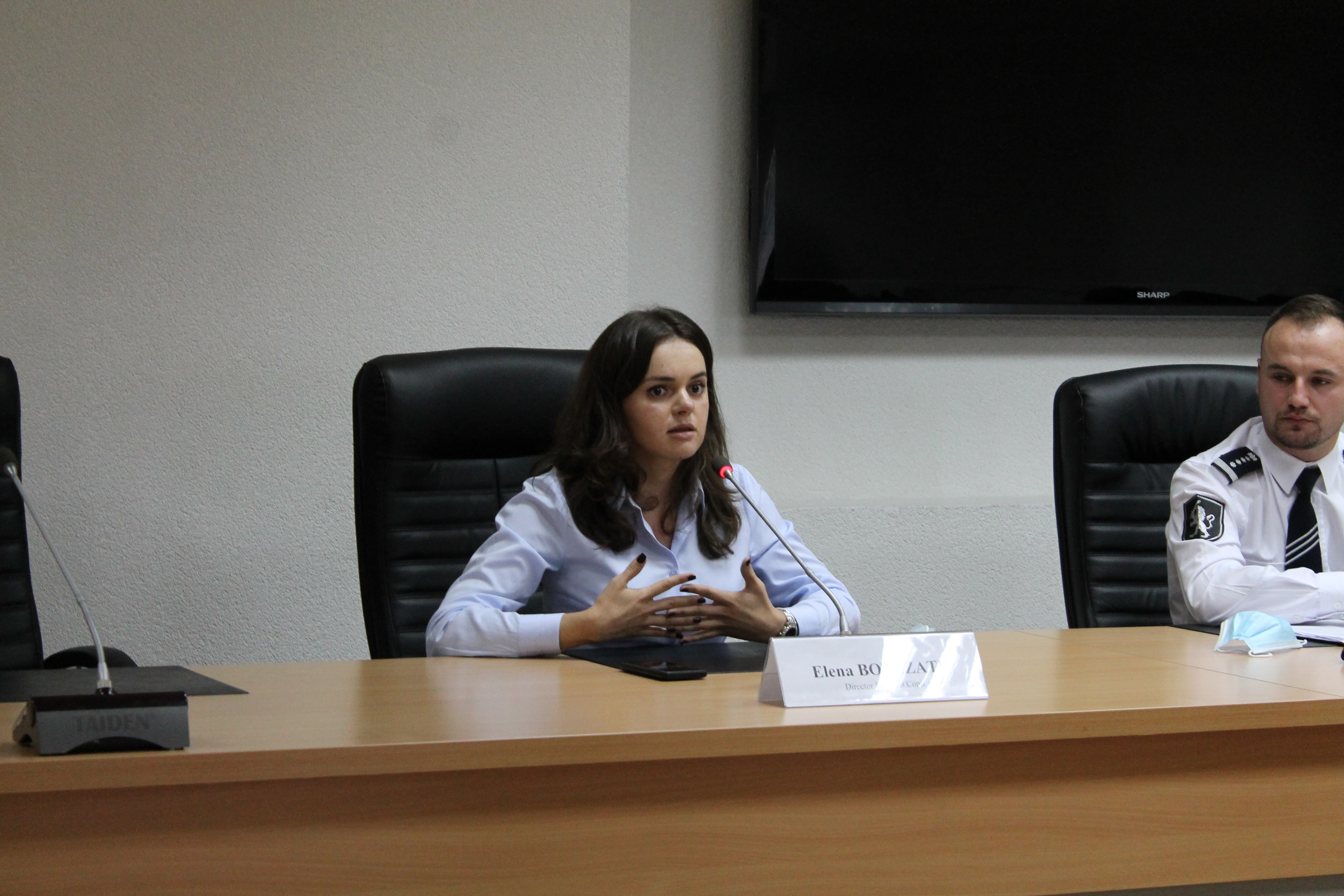 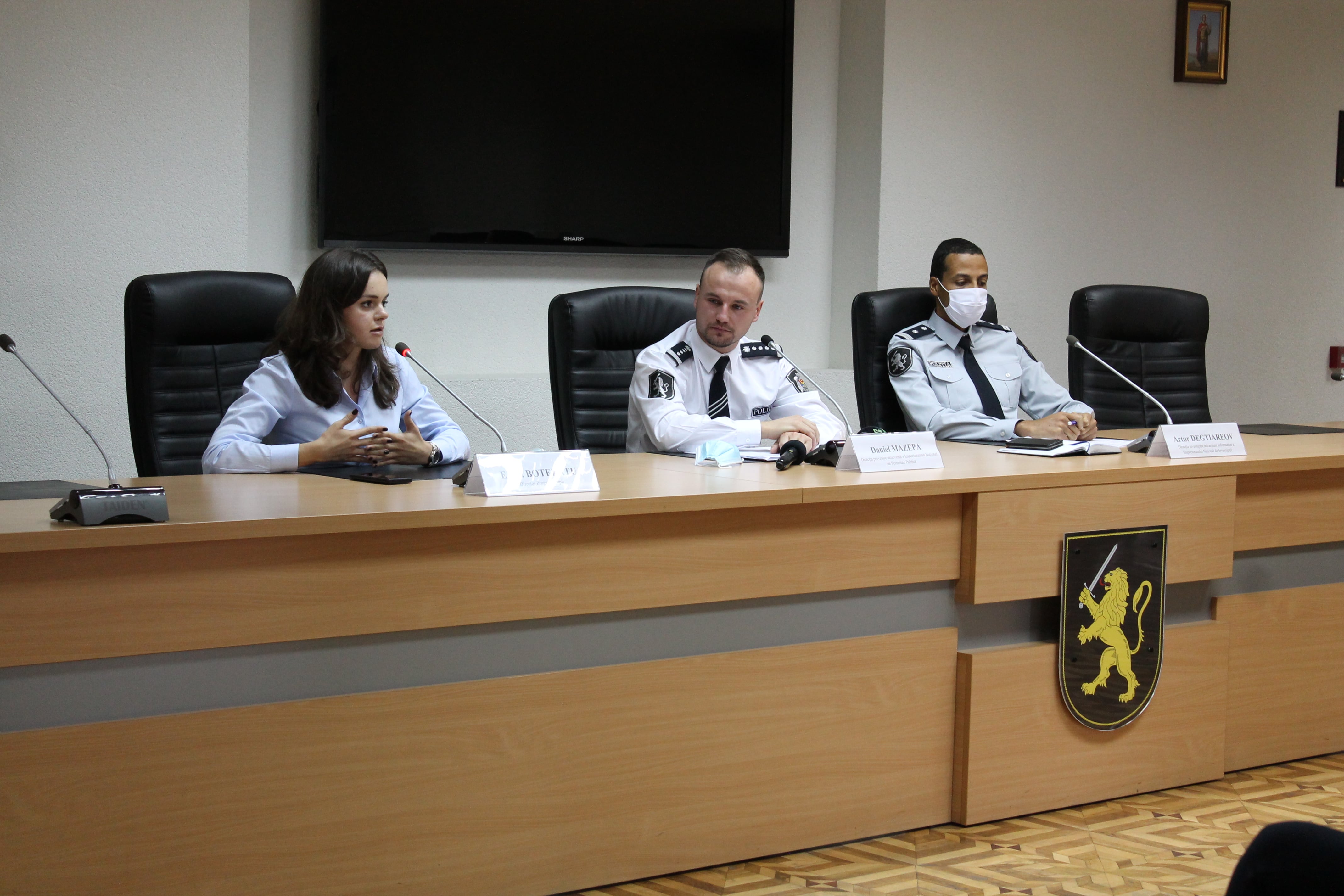